In the early 1920’s William Franklin Ware, grandson of Charles Ware, began operation of W. F. Ware Company, a business which contracted popcorn from area farmers. W. F. Ware Company was the first wholesale handler of popcorn south of the Ohio River. In the beginning, “Fireside Popcorn” was packaged by hand at Trenton and distributed in area stores in the early 1930’s. Later the “Kentucky Kernel Popcorn” was processed and packaged at the Trenton Plant and shipped by rail to movie theaters all over the southern United States. 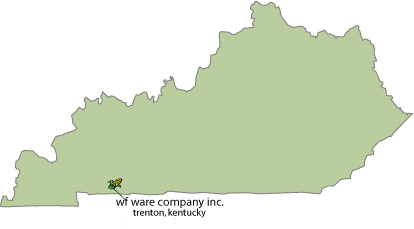 In 1937, a large acreage of popcorn was grown over a five county radius and shipped on the ear in boxcars to processors in Kansas City, St. Louis, and Chicago as there was a crop failure in the regular popcorn producing areas. Using farm timber, a processing plant was built across from the L & N Depot in 1940. This plant exploded in 1946, badly injuring R. F. Ware and Al Ware who were fumigating at the time.

In 1948, Robert Franklin Ware joined his father in the operation of W. F. Ware Company. Constructing a modern processing facility in Trenton. The plan of the plant was to guarantee proper drying of popcorn to obtain the ideal popping moisture content. Conveyor belts and drying fans were used in the installation. The plant burned in 1950. After the fire, popcorn was shelled by Trenton Grain Co., until 1952 when W.F. Ware Co. purchased Trenton Grain Co. from Dillard Payne. It was at this time W. F. Ware Company began handling yellow corn, barley, and wheat in addition to popcorn. In 1963, soybeans became a profitable crop for area farmers and were added to the commodities handled by W.F. Ware Company.

In 1959, after his father’s death, Robert F. Ware became President of W. F. Ware Company. In 1961, W. F. Ware Company shipped the first barge load of wheat from the Cumberland River Basin (the barges were loaded at the Clarksville municipal landing on the Cumberland River). This was the first downstream grain movement since packet boats hauled out wooden barges loaded with corn in the early 1900’s.

Presently, W. F. Ware Company, Inc. operates out of our main facility in Trenton. With only a few adjustments, W. F. Ware Co., Inc. has been operating on the same property since 1952. Robert F. Ware has recently retired, leaving his family to continue what he and his father began. His daughter Leigh Groves operates as the head financial secretary, her husband Barry Groves is now President and General Manager, and their son Keith Groves operates as Vice President and Operations Manager. 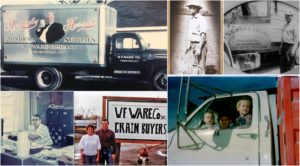